WHY ARE THERE SO FEW WOMEN IN ELECTRICAL CONTRACTING 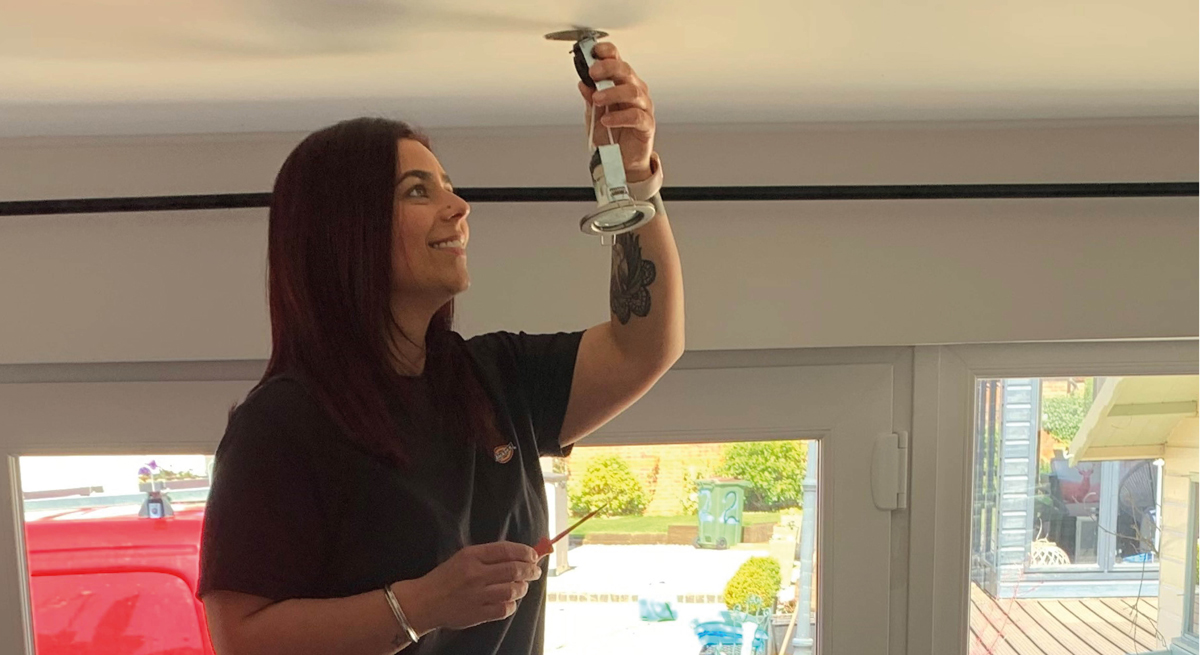 Brett Smyth, general manager of Ideal Industries EMEA, the specialist in tools and accessories for the electrical installation sector, asks why there are still so few female electricians and what can be done to attract more women into the sector. He also interviews Amy Barratt-Singh, an electrician the company is sponsoring, who has established a successful career after retraining as an electrician just four years ago.

The days when schools segregated the girls into one classroom to learn cookery and needlework and the boys into another to do woodwork and metal craft may be long gone but, when it comes to electrical contracting, it would appear that gender stereotyping is alive and kicking.

No doubt, education environments and family assumptions about the careers that boys and girls will follow play a part, but are there also unpalatable truths that we need to face up to as an industry? Has the electrical sector overlooked the diversity and inclusion agenda and failed to embrace the opportunity to recruit more women. Or, worse, is there a reluctance to disturb the status quo?

Whatever the reasons for the scarcity of female electricians working ‘on the tools’, the perception for many would-be female electricians is that the industry is hostile environment for women. Anecdotally, the evidence of women fighting against stereotypes to fulfil their ambitions in the sector demonstrates the scale of the challenge. For example, Amy Barratt-Singh, the electrician Ideal Industries is sponsoring through her excellent You Tube channel, told me that during her first job on site, there were no welfare facilities and she felt too intimidated to ask for them to be provided. As you’ll read in the interview that forms part of this article, Amy is a skilled and ambitious electrician who is much more likely to speak up for herself these days, but her experience highlights the issue facing both would-be female electricians, and the employers that might recruit them. It is not just stereotyping and educational opportunity that need to be resolved, but an ingrained culture that assumes all electricians are male.

The good news is that things are beginning to change. There has been a 366 per cent increase in young women beginning apprenticeships in construction or engineering over the past five years. But things are only changing slowly. Only 11.5 per cent of female tradespeople across all site trades are women, and just 3 per cent of electricians are female.

At a time when we need to boost the number of skilled electricians to enable the roll out of electrical vehicle infrastructure, renewables technologies and smart buildings, these statistics are indicative of the scale of the challenge the electrical industry faces. If we need more electricians but most of the sector’s new recruits are being drawn from just half of the population – the male half – we’re missing a trick. And, unfortunately, it is a chicken and egg conundrum: with so few women working as electricians, the next generation of potential female professionals has to be prepared to work in a male dominated environment. As a result, the industry remains lacking in female role models and the slow pace of change remains frustratingly slow.

That’s why, when we came across Amy Barratt-Singh, a women who retrained as an electrician – at her own expense – just four years ago, we were so impressed with her that we offered her both samples of our products and an offer a sponsorship. Why? Because she is exactly the type of electrician the industry needs to inspire both women and men - including those already working in the sector and the next generation of professionals. Having been discouraged from following her dream as a young school leaver, she returned to education aged 28 to retrain at her own expense while continuing to work as she learned. Now, just four years later, she has recently been promoted to contracts manager by her employer, Synergy Smart Homes, managing a team of four electricians.

It’s not just the way that Amy is acing her own career that is so impressive, however; it’s also the way she’s working hard to inspire and encourage others. Active on both Instagram and YouTube, she is helping to show other women how rewarding a career on site can be in both electrical and other trades, as well as encouraging school leavers into vocational training.

I caught up with her to find out more about her story so far.

Brett: What made you want to become an electrician?

Amy: My grandad was a plumber and, as a kid, I loved helping him do jobs and developed an enjoyment for learning practical skills. My two brothers grew up to be electricians but, as a girl, I was never encouraged in that direction at school or at home. I suppose I didn’t really consider it as an option so I ended up working in education.

It was only when I went travelling for a year that I was able to step back and think about what I wanted from a career. Travelling also gave me the confidence to go for it, and I definitely needed that because I had to pay my own way as a mature student and deal with being the only women on my course.

Brett: Were your friends and family supportive of your choice?

Amy: There was a real male/female split in the response to my decision to retrain as an electrician. My mum was really encouraging and my female friends were very supportive because they knew I really wanted it.

Brett: What did you find most challenging about training as an electrician?

Amy: Getting people to take me seriously was quite challenging at first and, because I had bills to pay, despite being in college 25 hours a week, I was working as many hours as I could to pay for my course and my living expenses too. That commitment is what helped me to gain the respect of my peers though, so it was definitely worth it.

Brett: And the most rewarding?

Amy: The most rewarding part has been doing a job that I love. I’ve worked really hard from the outset and built on my initial decision to invest in myself with retraining by investing in tools and a van to super charge my career.

Brett: How important has the Ideal Industries sponsorship been to you?

Amy: It’s great to have a globally-recognised electrical brand support me and acknowledge what I’m doing to encourage others. I’ve used a few of the products and love them, especially the FT-45 Feed Thru modular plug system for data terminations, which I’ll be using a lot of now I’m working for a smart homes specialist. I’m excited to see where the relationship with Ideal will go and it’s great to know that the company is getting behind the need to encourage more women in the sector.

Brett: What else do you think electrical supply chain companies can do to encourage more women into the sector?

Amy: The best way to encourage more women into the industry is to show women and girls images of people like them doing the job. That’s why I am so active on social media. Companies can help by putting women on their website and in the marketing materials so that the idea of women working as electricians becomes a normal, accepted career choice.

Amy: I started the YouTube channel and my Instagram to encourage other women to work as electricians and in the trades. I’m really proud to be inspiring others and it’s so rewarding when I’m contacted by women who just need a role model to help them believe in themselves and follow their dream. I didn’t set out to be the poster girl for women in electrics but, if my profile helps to encourage others, I’m delighted to be part of positive change.

Brett: What would your advice be to other women who want to work in the electrical sector?

Amy: I would definitely tell them to go for it! I love my job and have already progressed beyond where I anticipated in my career, but I can see more potential for career development ahead. I’d advise women to be confident, and committed to their goals, though. I wish I’d been tougher in my first job as an electrician because I did encounter some prejudice, and I was so taken aback by how hostile some of my colleagues were to having a woman on the team that I didn’t respond in the way that would have earned me more respect and acceptance a lot sooner.

The other advice I would give anyone, male or female, is to invest in your career development for the long term. Work hard, get as much experience as you can by working in different environments and with different people that you can learn from. And, of course, if an opportunity comes your way, whether it’s sponsorship from a company like Ideal, a chance to learn a new skill or a promotion, grab it with both hands!

Let’s Pick Up The Pace

With role models like Amy inspiring a new generation of potential electricians, it seems that the industry is making progress in attracting more women. Ideal Industries is keen to play a part in driving positive change too so that we can nurture talent and encourage a more diverse profession.